For many agricultural products, tariffs are higher on the processed good than on the raw material. Such tariff escalation is widely used to protect domestic processors of raw materials from foreign competition.  Removal of these tariffs may mean that, while there is no direct impact on the volume or price of the raw material, the processor is no longer able to compete.

In the following summary, we use butter to illustrate some of the ways that can be used in a more in-depth analysis of the agricultural consequences of changes to the international terms of trade for processed products.

Butter price is only one component of the milk price. However, similar analysis of skimmed milk powder protection can be combined to estimate milk price.

Impact of EU support and change in internal and export prices 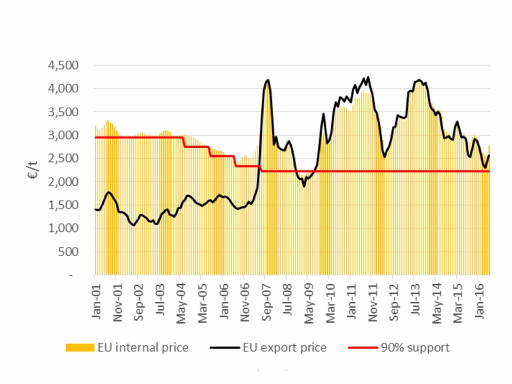 Task 1 is to identify the relationship between the EU commodity price and the historic support arrangements. Task 2 is to examine the difference between internal and external EU prices. The graph above describes these relationships.

While butter support has been important historically, it has decreased and the global price has simultaneously increased. The internal EU price now mirrors the external world price. 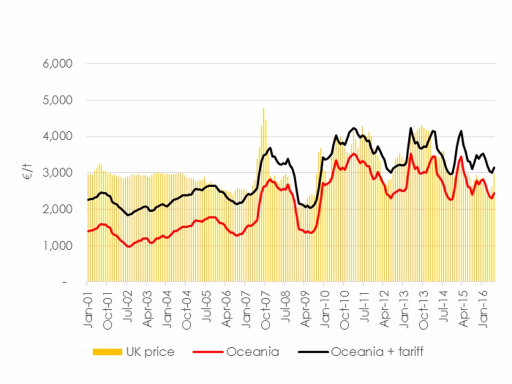 Task 3 is to identify the impact of historic tariffs on the difference between the EU internal prices and the import price, and any anomalies.

New Zealand is granted (what is termed) non-preferential access to the EU market via a Tariff Rate Quota (TRQ) now set at €70/100 kg, well below the general EU tariff of €189.60/100 kg. The total quota is 74,693 t.  While historically this was taken up, since 2007 a smaller volume has been imported and New Zealand has remained (in most years) the main non-EU contributor to the EU market. No doubt some imports are due to availability and specific quality attributes at particular times of the year (as also applies to EU exports) but there is a core volume that determines EU butter price. The unusual situation of massive surplus in 2015 and 2016 disrupted the general relationship, by making imports exposed to the tariff expensive, but this is likely to be short lived. The tariff explains most of the difference between the EU and the globally traded price.

The relationship we have identified suggests that the tariff is important in determining price: New Zealand imports would enter the EU at a lower price if it were not for the tariff. However, the full EU tariff is even higher and effectively prevents imports from other countries.
The relationship between two sets of prices is rarely absolute but there is often a range around an average. The shape and distribution of this range, along with any inconsistencies, can be used to quantify financial risk. 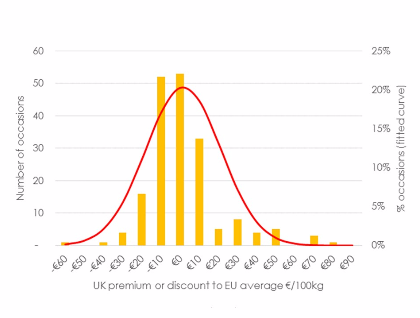 The statistics show that while the EU as a whole is a net exporter of butter the UK is a net importer. While the New Zealand TRQ came into being because of the historic relationship between New Zealand and the UK, most UK butter imports now come from the Republic of Ireland. Butter quality varies with time of year and production method so not all butter is the same and some imports may be at a premium. However, the tariff determines the majority of imports and internal price.

Post UK exit from the EU there are a number of possibilities:

Changes in price will also influence the volume of UK production and consumption. While a large rise in the butter price would be expected to direct consumption to other yellow fats reducing demand, preliminary study suggests within the likely price range this would be negligible.

The likely impact on UK butter prices can be estimated and thus the investment risk. The inclusion of other milk components allows an assessment of the impact on milk price.  As new announcements are made the anticipated price range can be narrowed.